THE EVOLUTION OF A BOOK COVER

The title of a novel is a major consideration.  It is the author’s first opportunity to create some interest. For the new book, I was somewhat limited by wishing the title to start with a gerund beginning with the letter C—as with the three Jake Diamond novels—Catching Water in a Net, Clutching at Straws and Counting to Infinity. On top of that—it’s a good idea to have the title say something about the book. Chasing Charlie Chan worked both ways.  Given the title is critical, so should be the manner in which it is presented on the book jacket—the cover being an equally essential piece of the presentation—the invitation to look inside.  Jason Smith—who created the title artwork and hand painted the front and back cover images—allowed me into his world—staying open to my thoughts and ideas—working closely with me to come up with a design that would truly represent what lay in wait within. 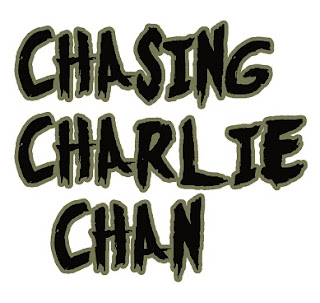 There were two considerations when approaching the front cover. Down & Out Books, the artist and the author all agreed to work on a concept that brought to mind the noir private eye novels of the forties and fifties—Chandler’s Philip Marlowe and Spillane’s Mike Hammer—albeit without the damsel in distress. (Sorry, no scantily clad babes aboard.)  I believe if you don’t grab the reader in Chapter One you have lost half the battle— therefore Jason and I decided on using an image which captured a moment in those first pages.  Here is an early rendition. 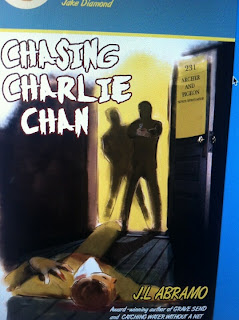 It was Jason Smith’s idea to use a badge—a small representation of the main protagonist which could be used in subsequent books and add to the dime store novel feel. Here is an early version of the Jimmy Pigeon badge. 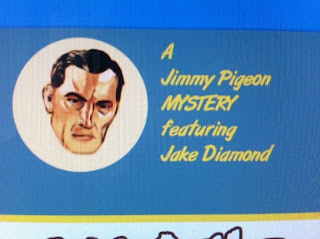 The book is a work of fiction.  Any resemblances to people alive or dead are coincidental and not intended by the author.  That being said, we came to thinking out the back cover and the images that would best represent the story within the story.  Here is Jason’s early work—original paintings of characters coincidentally called ‘Bugsy’ Siegel and Virginia Hill (alright, there is a dame) from forties photographs—and a 1947 newspaper article. 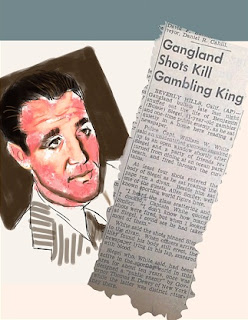 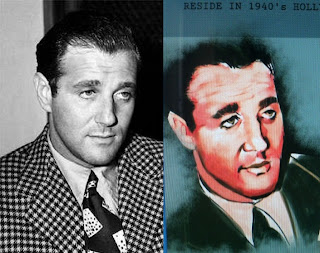 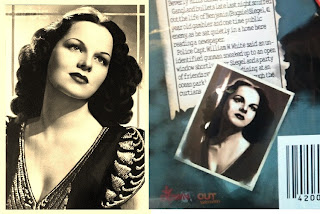 Putting the front and back covers together was the next step—here is an early version of both with spine—including the Jimmy Pigeon badge.  The author name font was also changed and finalized at this point. 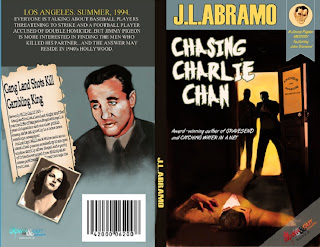 The back cover needed more pop—and the Las Vegas strip in the late forties was just the ticket.  Jason beautifully incorporated the image—pushing the lady to the top left—and changing the book description to a more classic style font. 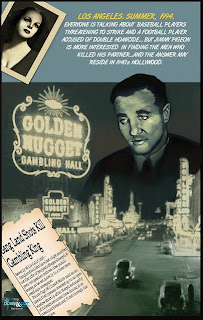 The next installment was very cool—particularly in the form Jason sent it—giving me a glimpse into the way he worked—the shape of his palette.  And we were so close. 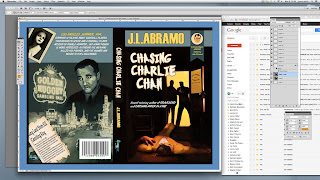 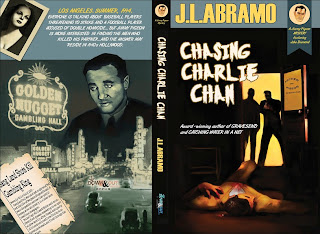